Sister Rosetta Tharpe Takes You Down By the Riverside

Guitar wizard, rock & roll pioneer and gospel-blues giant Rosetta Tharpe was not tilting at windmills; she was the Windmill

Guitar virtuoso Sister Rosetta Tharpe was a rock & roll pioneer whose influence has been acknowledged by Elvis Presley, Little Richard Jerry Lee Lewis, Carl Perkins, and Sleepy LaBeef, among others. A bold woman who wasn’t afraid to sing about her faith or her sexuality, she also challenged those who didn’t believe women could make their own business decisions. In doing so, she broke every “social norm”.

Ginger Baker, later of Cream, met Sister Rosetta Tharpe in the late 1950s when she toured with the Diz Disley blues band, for whom he played drums at the time. He recalled, “We did a whole tour of Scandinavia with the gospel singer Sister Rosetta Tharpe. She was a great lady and really took to me when we first met. She had bright red hair like me and said ‘Oh, baby, your hair’s so cool. What do you use to make it that color?’ ‘Nothing.’ I said. ‘It’s natural.’ To which she threatened to pull down my trousers to check if I was telling the truth.”

She was born Rosetta Nubin on March 20, 1915, in Cotton Plant, Arkansas and raised by her mother Katie, a preacher who sang and played mandolin at The Church of God in Christ. The founder of that church, Charles Mason, encouraged the women of Cotton Plant to preach, and that’s just what young Rosetta Nubin did. Further encouraged by her mother to pursue music, Rosetta learned to play guitar by the age of four. Within a few years, she was traveling with Katie, performing at local gospel concerts.

By 1925, Tharpe and her mother moved to Chicago. There, she continued to perform at gospel concerts where she was considered a rarity and was, in fact, often billed as “a singing and guitar playing miracle.” Audiences had never seen a black female guitarist before, especially one who was a pre-teen!

By 1938, Tharpe got her big break at “The Cotton Club Revue” in Harlem, headlined by Cab Calloway and the Nicholas Brothers. Through that exposure, her talent was recognized and she was soon recording the first ever gospel album for Decca Records. 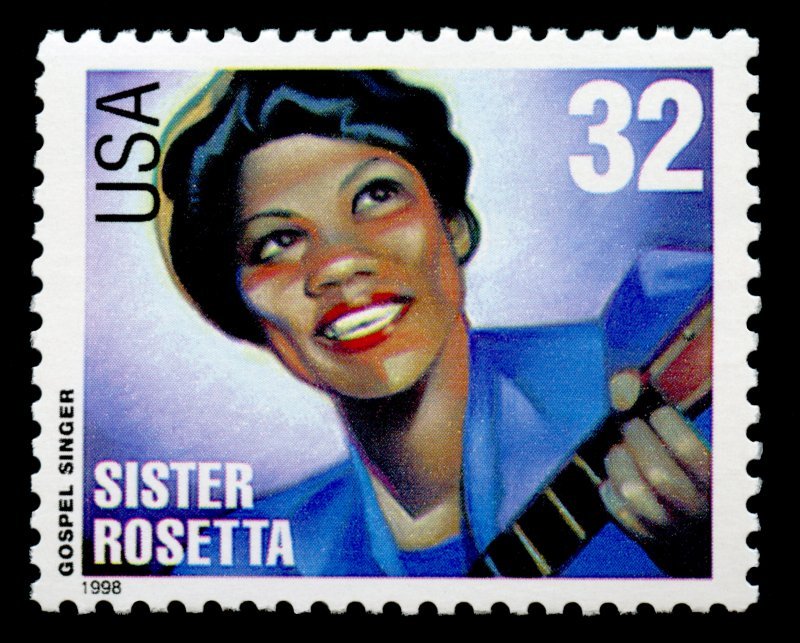 In recording these songs, she was slowly pushing gospel and spiritual music into the mainstream. In 1944 and 1945, Tharpe’s recordings, including “Down by the Riverside” and “Strange Things Happening Every Day” (the latter featuring her electric guitar), rose to the top of the charts. At the time no such genre as “rhythm & blues” existed, so the recordings were marketed as “race records.”

Tharpe was faced with many challenges throughout her life. She was an African American female living in a time where women were expected to be housewives and segregation curtailed advancement for anyone whose skin was not white. African Americans were regularly forbidden entrance into restaurants and hotels, so while touring with the Lucky Millinder Orchestra, Tharpe had no choice but to sleep on tour buses.

“‘Oh, baby, your hair’s so cool. What do you use to make it that color?’ ‘Nothing. It’s natural.’ To which she threatened to pull down my trousers to check if I was telling the truth.”

As a woman working in a male-dominated industry, she was often given the backhanded compliment, “You play like a man.” Singer Inez Andrews recalled, “The fellows would look at her, and I don’t know whether it was envy or what, but sometimes she would play rings around them. She was the only lady I know that would pick up a guitar and the men would stand back.”
Her guitar playing was so advanced that she had perfected a signature move – “The Windmill”. People often think it was Keith Richards or Pete Townshend who invented the move, in which guitarists swing their arm in a vicious windup before delivering a powerful strike to sound the chords on their guitar. However, early footage of Tharpe performing proves otherwise. Sister Rosetta Tharpe…a rock & roll gospel singer with a signature move? No wonder the men were envious!

Tharpe was romantically involved with both men and women and was married three times. Her first marriage, to preacher Thomas J. Tharpe, provided her stage name, Sister Rosetta Tharpe. She was open about her sexuality among her friends, but kept her personal life hidden from the public. In the 1940s, ‘queer’ black women were scarce, to say the least, and she didn’t want to put an end to her career. During this period, singer Marie Knight became her partner. Tharpe and Knight toured together, eventually recording “Up Above My Head” and “Beams of Heaven” for Decca. 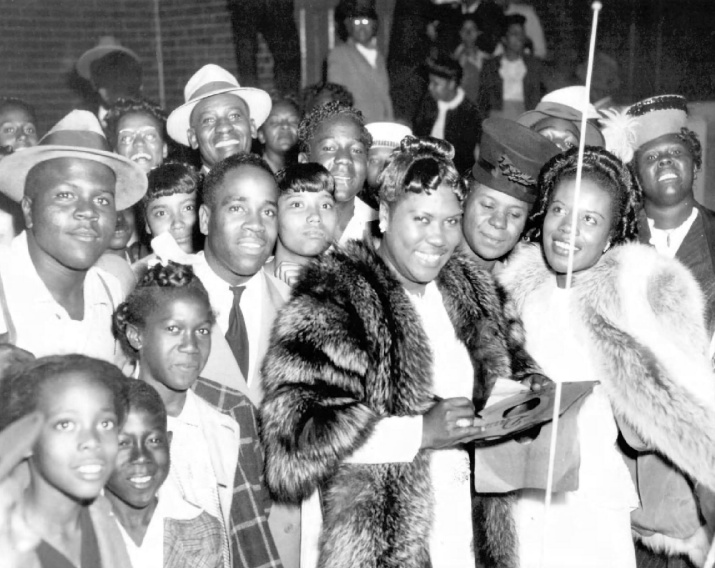 A YouTube video of “Up Above My Head” shows Sister Rosetta singing with religious fervor and boundless energy, then diving into a guitar solo with gusto. I would definitely go to her church. After seeing her in action, it’s difficult to grasp why she isn’t acknowledged in most rock histories.

In 1949, Tharpe recorded a version of “White Christmas.” By then, rhythm & blues was a separate recording genre, and so her recording entered the “R&B Hit Singles” chart.

By the 1950s, Tharpe began moving into more bluesy material, and many of her gospel fans drifted away. She wanted to move along with the times, but her audience was not ready for it. In New York, she and Marie Knight were still welcomed into the jazz clubs, but Tharpe was already feeling disillusioned by American audiences.

England was a different ball of wax. There, during the late 1950s, British youths were hooked on the blues. Every musician from Alexis Korner to Eric Clapton to Brian Jones was listening to the blues greats, most of whom were black and from America. Songs by Muddy Waters and Robert Johnson were learned, memorized and analyzed, serving as major influences in their lives and music careers. It was during this transitional time, in 1957, that the Chris Barber Band sponsored the now legendary “British Blues Revival” concert. Tharpe, who was a celebrity in England by then, received a warm reception from the audience.

Her guitar playing was so advanced that she had perfected a signature move – “The Windmill”. People often think it was Keith Richards or Pete Townshend who invented the move. However, early footage of Tharpe performing proves otherwise.

From 1958 to 1960, she toured throughout Europe, eventually landing a gig with the Diz Disley band, showcasing a young Ginger Baker on drums.

By 1964, Tharpe had been away from the recording studio for some time. Interviews and TV appearances were few and far between. Record producer Joe Boyd witnessed what he called the ‘death’ of the blues in America firsthand. In Greenwich Village and throughout the United States, his generation was now listening to folk music. Electric blues artists like Muddy Waters, Howlin’ Wolf and John Lee Hooker were finding it harder to get gigs, though country blues and acoustic blues artists like Reverend Gary Davis and Mississippi John Hurt were taken to heart by the folk crowd.

Joe Boyd thought the neglect of major urban blues artists was nonsense. Skilled blues artists were sitting at home in America when they could be playing gigs every night in Great Britain. Were Muddy Waters, Howlin’ Wolf and John Lee Hooker aware of their popularity in England? Perhaps not. If they did know, they’d probably be asking. “Where’s the phone call?”

Sensing the interest across the pond, American music promoter George Wein created the “American Folk Blues and Gospel Caravan” in 1964 and brought it over to England for a 17-city tour. On that “caravan” was Sister Rosetta Tharpe, along with Otis Spann, Ransom Knowling, Muddy Waters, Willie Smith, Brownie McGhee, Sonny Terry, Reverend Gary Davis and Cousin Joe Pleasants. Ironically, Tharpe didn’t want a blues player like Spann backing her up, but after many disagreements, Boyd managed to get them to play together. 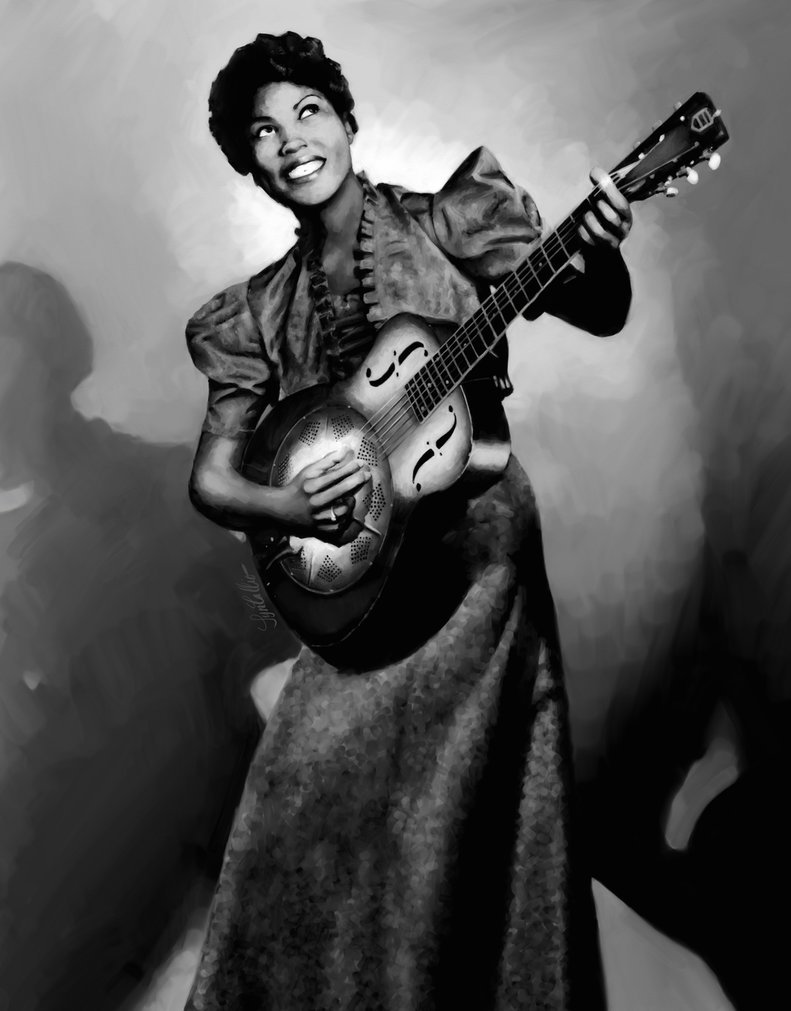 In his memoir White Bicycles, Boyd writes, “I coiled the mic cable and left it beside her in the wings as Gary (Davis) came out to start the second half. When he picked out the opening chords of “Precious Lord” Rosetta began to moan. She was back in that little country church in Arkansas with her mother, singing in a primitive style I had never heard from her. Gary lifted his head and murmured “Oh Lord, sing it girl!” Her interjections seemed to transport him to another time and place, recreating music that few people had ever been privileged to hear.”

Tharpe was encouraged by the audience’s overwhelming response in England, and she appeared with her mother Katie at Wein’s Newport Folk Festival in 1967. Clad in her infamous mink outfit, Tharpe shared the bill with Muddy Waters, Buffalo Springfield, Pete Seeger, and Judy Collins, among others. The definition of “folk” had expanded greatly from the “purist” early days of Greenwich Village coffee shop venues.

In 1970, at a show in Switzerland, Tharpe suffered a stroke. A year later, she was diagnosed with diabetes, and eventually had one of her legs amputated. The same year, despite her recent operation, she sang with her ex-partner Marie Knight at the “Gates of Prayer Church” in New York City. 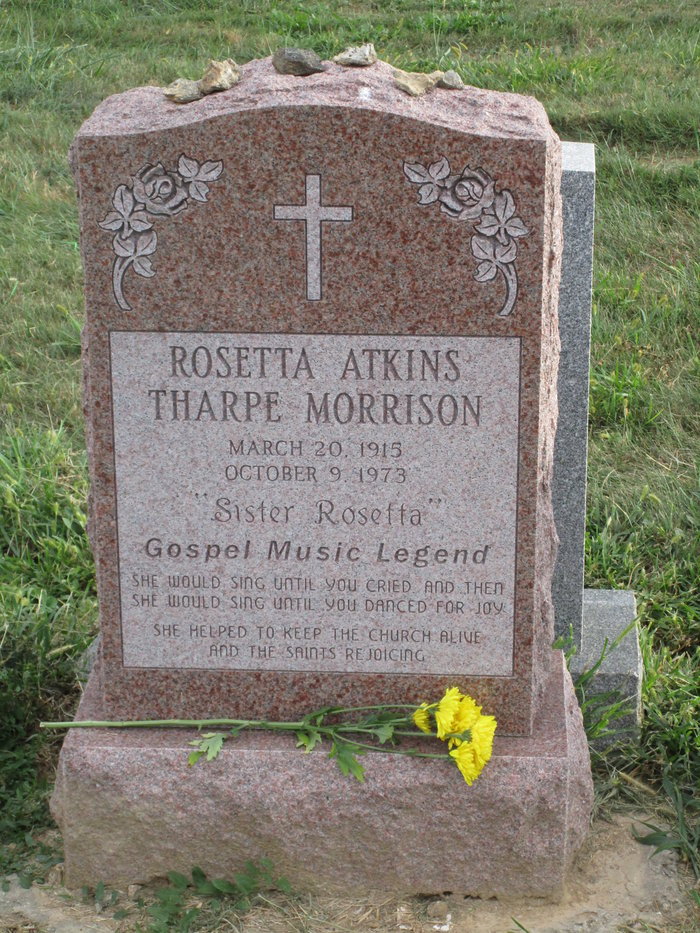 Sister Rosetta Tharpe was a musician who shocked her audiences with her bold demeanor and stage presence. She was a woman who took charge of her life and career, and did not throw up her arms in despair because she was “colored” and a woman. If anything, these prejudices made her stronger and kept her going until the end.

Some might say, myself included, that Tharpe was an underappreciated musician. There are few books that mention her, and interviews are hard to come by. However, as I entered the ‘Soul of a Nation’ exhibition at the Tate Modern recently, I felt a bit of hope for future generations. There was Sister Rosetta Tharpe on the big screen, wind-milling that electric guitar of hers.

Ginger Baker recalled an incident that embodied Sister Rosetta Tharpe’s toughness:
“The station at Copenhagen is on a curve: it’s a big ‘mind the gap’ situation, with a foot-wide cavern between the platform and the train. A huge crowd had assembled to greet Sister Rosetta and a little girl was standing in front with a bunch of flowers. Sister came toward the girl to take the flowers and suddenly disappeared down the gap…everybody rushed to help her out, and she graciously accepted the flowers and we all got on our way. I travelled with her in the taxi to the gig from the station and her shins were scraped to hell. She sat down and let on that she’d hurt herself. Until then, she hadn’t reacted at all – it was absolutely amazing. She was a great professional.” 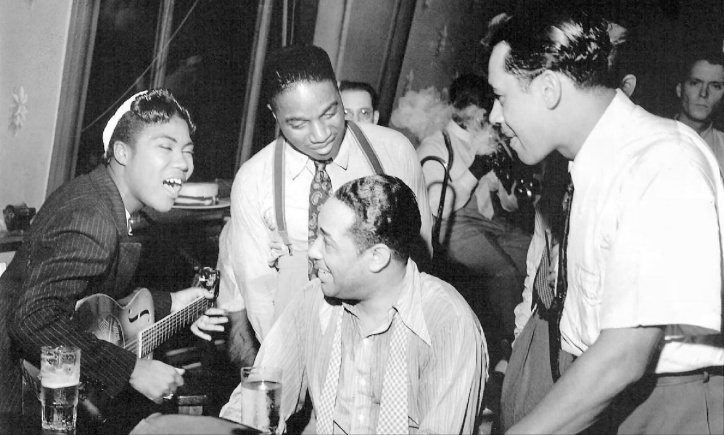 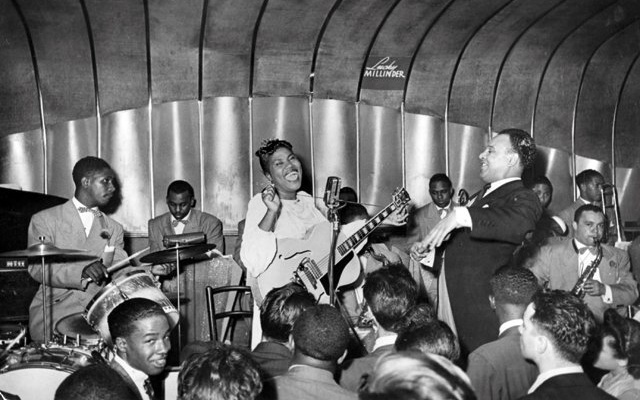